The mighty Col d’Iseran and Col du Tourmalet! In line with the feature on Europe’s Greatest Climbs on a Bike that we have been running on the Marmot Tours Facebook page, here’s some information on the first couple of Cols to whet your appetite!

First up is the Col de l’Iseran (2764m) which takes the title of the highest pass in the Alps and the second highest col in Europe.

Since 1938 it has featured in the Tour de France 5 times.  There are many cols to dream of in the Alps but this is often thought of as the ‘holy grail’ of Alpine climbs.   There are 2 approaches to the col: the southern approach is more variable and arguably more demanding, its average gradient statistic of 7.3% hiding a sneaky maximum of 10.5%.

The Northern approach via Val d’Isere might be a gentler way to summit the Iseran – its max gradient is 6.9%!   However, if it is impressive scenery that you are looking for then probably you need to dig deep and go up from Bonneval-sur-Arc (southern side) as the glaciers to either side are suitably impressive.   You’ll be pleased to know that there is a restaurant at the top so whichever route up you have taken, you can grab a coffee, re-fuel and enjoy the views.

The Col d’Iseran features in both our Raid Alpine and Alpine Classic Cols trips.

A quick hop over to the Pyrenees, and another mighty beast of a Col, the Col du Tourmalet!  At 2115m, it is the highest paved mountain pass in the French Pyrenees.  The name means “nasty detour” and they are not kidding – despite not being the highest, it is one of the most feared cols in France.   Having been included in the Tour de France more than any other pass, its become infamous, and a real goal for any road cyclist.   The statue of a grimacing cyclist at the top of the Col is recognised world wide, embodying the very essence of the Tour de France, and what it is to cycle in the mountains.

The average gradient of both ascents (Eastern side from Luz Saint Saveur and Western Side from Ste Marie de Campan) is the same (7.4%) but the route from Luz is a little longer and gains 137m more in altitude… it may not seem much on paper but can make all the difference when you are on the bike 😉 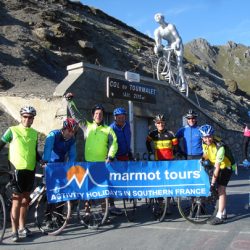 The col summit is another place to reward yourself with a coffee and snack – the cafe has a fantastic selection of cycling memorabilia and is well worth pausing at.   Be warned that the views from the Tourmalet are fabulous, but it is often cold & misty even when it seems warm and sunny elsewhere – there is something about that mountain and its weather system…it is a law unto itself.  Don’t attempt it unprepared!

If you want to take on the Tourmalet with the luxury of Marmot Tours support, then it features in both our Raid Pyrenean and our Pyrenean Classic Cols holidays.