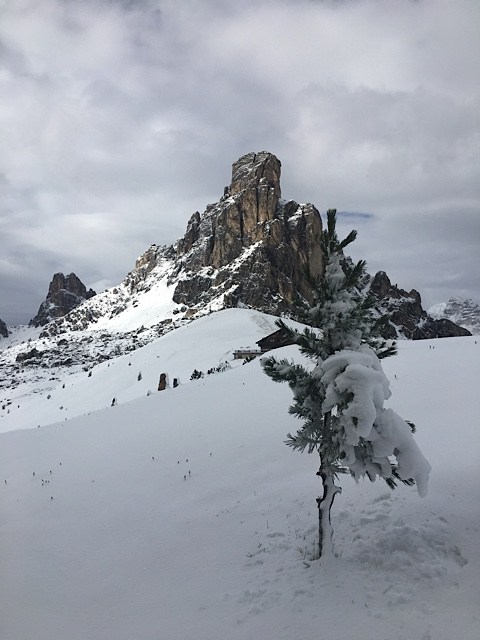 Thank you to Marmot Tours loyal client Fiona Russell Fionaoutdoors.co.uk for another insight into the joys of cycling in the Dolomites – not to be missed in spite of mad weather!

Cycling Holiday in the Dolomites

I confess that the snow was not what I hoped for on a cycling holiday of the Dolomites. It was still summer, after all, and I had brought my two-wheeled carbon hill climbing machine, not my skis.

Earlier that morning I had ridden away from the night’s hotel in Cortina d’ Ampezzo, in the heart of the southern Alps in northern Italy, amid our group of 20 cyclists.

It was raining but there was a promise of brighter weather later on and being Scottish, I am used to wet weather cycling.

The aim for the first part of the day – on day three of the Marmot Tours Dolomites Classic Cols trip ­ – was one of the classic mountain pass climbs of the Dolomites: the Passo Giau.

I had read the guide notes written by Marmot Tours, so I knew I was in for a stiff effort. The pass climbs to a height of 2237m – that’s 900m higher than Ben Nevis ­­ – and “apart from a (very) short section of downhill half way up, it is a relatively gruelling ascent”.

I had also read about the “magnificent views” of the surrounding limestone crags and peaks.

I also knew that there would be a coffee and/or lunch stop before my choice of another climb of the Passo Fedaia (2057m) from the east, well known to those that watch the annual professional cycling race the Giro d’Italia, or the Passo de Campolongo (1873m).

The day’s statistics for the “easier” Classic route were 66km and 2000m of total ascent, while for the Challenge route it was 92km and 30350m.

But then the snow came. 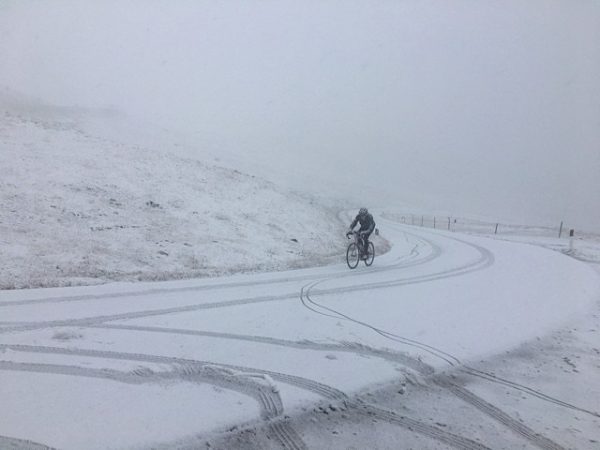 Cycling the Passo Giao with Snow, in Summer!

At first it was just a hint of a flutter of the white stuff as I slowly rode the first half of the Passo Giau. The average gradients of each kilometre were between 5 and 7%, which required my easiest gears and some determined pedalling.
From 5km to 8km, the climb eased a bit, to between 3 and 5% but the snow came down a little harder.
Then the gradients ramped up again, this time to many kilometres of 8 – 9% and some stiff stretches of muscle pumping 12%!

I should have been feeling warm because of the effort but instead I started to shiver as the snow settled on the road ahead.
Unexpectedly, my European summer cycling holiday had turned to a full-scale winter expedition.

When one of the group, Nick (a great cyclist at the grand age of 66) caught me up, he hoped for (he told me later) a cheery smile and a bit of banter. Instead he found me glum and very cold.  He rode on ahead of me as I cycled increasingly slowly, wishing I was “there already”. (When cycling mountains you go at your own pace so I wasn’t offended that he had caught me up and overtaken me.)

What I had forgotten is that Marmot Tours’ two support vans were patrolling close by. As one, driven by Tim, came up behind me I tapped the top of my helmet to give the signal that I needed some help.  Tim pulled over at the first safe place and asked if I was okay. By then my teeth were chattering and within seconds I was being ushered off my bike and into the warm front cabin of the van.  Tim put the heater on to full power, tucked my bike into the back and carried on up the mountain. 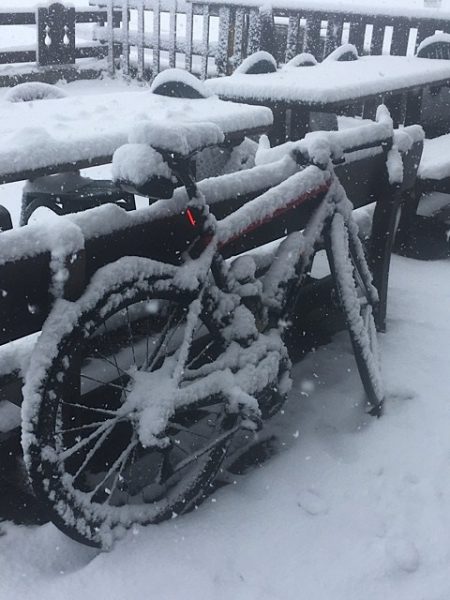 It was a surreal sight: the snow was, by now, coming down heavily and the former green landscapes of September had been turned into a picture-postcard ski resort.

The other riders were bravely pushing on and most were still able to ride their bikes.

As Tim descended further down the mountain and then drove back up, he stopped to ask the cyclists if they wanted a lift, or to carry on. He told everyone to stay in the warmth and safety of the hotel bar at the top of the pass and wait for instructions.

Huddled up at the mountain top cafe

But the time I arrived, there was a mix of emotions among the group. Many were cold and eagerly awaiting their daypacks from the van. Inside were layers of warm and dry clothing packed by each of us that morning. The van was struggling to reach the bar in the snow and in the end Tim walked the bags from the van to the waiting group.

Yet everyone was seemingly up-beat, too. No-one could quite believe the scene unfolding outside the window and we all took the opportunity to rest, eat hot meals and drink good Italian coffee and thick hot chocolate.

I had entered the bar feeling very cold indeed but with 15 minutes I was warming up nicely. I was given a steaming cup of thick hot chocolate and lots of spare clothes to put on. 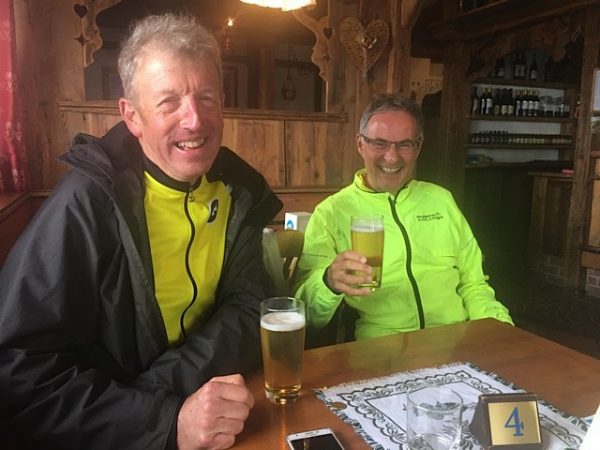 For the next few hours there was nothing that anyone could do. The van was not able to descend the mountain in the snow and there was apparently only one taxi company in the area with snow chains available.

We huddled together as a group and got down to chatting and laughing together.  Most of us had only met a few nights before at the start of the Marmot Tours trip in Venice and the stranded mountain top meet-up offered a chance to get to know each other better. 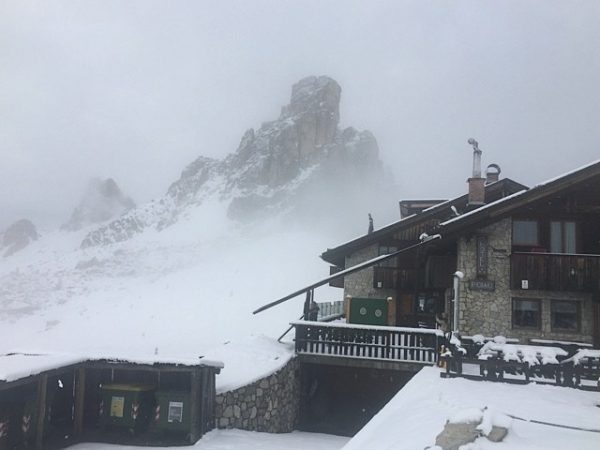 Every so often we would look out the window in awe to see the snow piling up around us and wonder if we might make it to the next hotel by nightfall. Then we would go back to chatting and, by then, a pint of beer or a glass of wine.

Amazingly, as suddenly as it started, the snow stopped and the promised sun came out. As the sun warmed up the sky and the clouds disappeared, a spectacular scenery of snow-covered craggy high peaks and myriad mountain tops appeared.

It was spell binding. 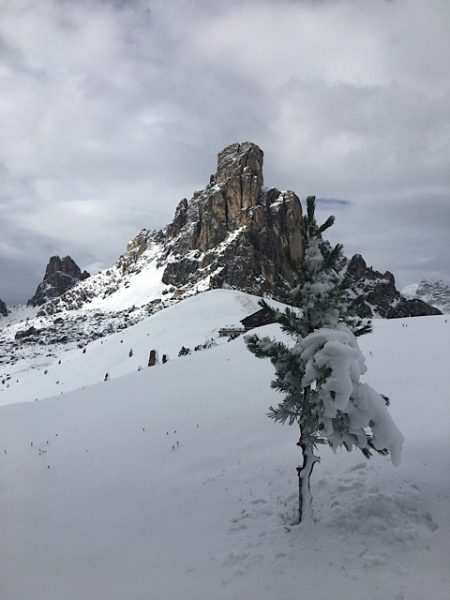 Getting off the mountain

By now, the road had been cleared by a snow plough, and taxis were able to reach the summit. Some of our group decided they would like to cycle the smooth tarmac descent to the village of Caprile. A few bravely rode on to the hotel.

For others, the offer of place in the van was far more inviting. Many people still felt chilled and the temperatures were dropping in the late afternoon. 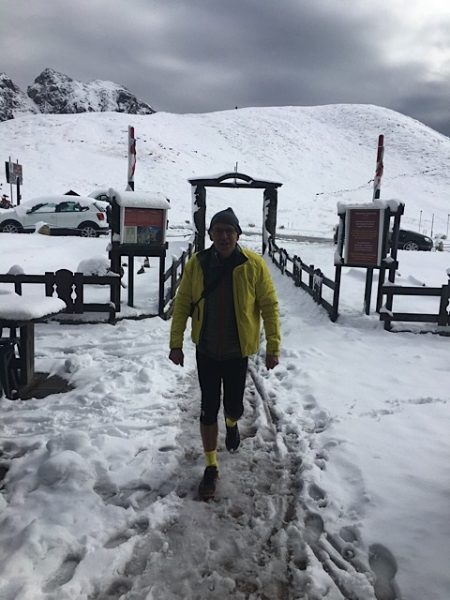 Tim began loading up the Marmot van with bikes and with two people aboard at a time, he made trips down the mountain.

The second van appeared, driven by Pedro and which had been dealing with a rider’s punctured tyre, and the rest of the cyclists were rescued. At a café in Caprile, we regrouped for the final journey to the hotel in La Villa where we would be spending the next two nights.

While the snow had made me cold and miserable for a time and our day’s ride had been curtailed, the outcome had not been as bad as I first thought. I had welcomed an enforced rest day after a few previous days of cycling in the Dolomites.

I had valued the chance to get to know more of our group and enjoyed the atmosphere of “being in it together”.

Tim and Pedro had shown themselves to be very resourceful and supportive in difficult and unpredictable circumstances. And when we eventually arrived at the wonderful Hotel Antines in La Villa, we all felt we were very much due a spell in the fitness and sauna suite, a few drinks at the bar and the fantastic evening meal. Another bonus came over the remaining days of our week’s holiday. While the snow started to melt lower down the slopes, the higher peaks remained dusted with white and this created some of the most fabulous views of the eastern Alpine landscape that I have ever seen.

Also read about cycling the Stelvio a couple of days later.