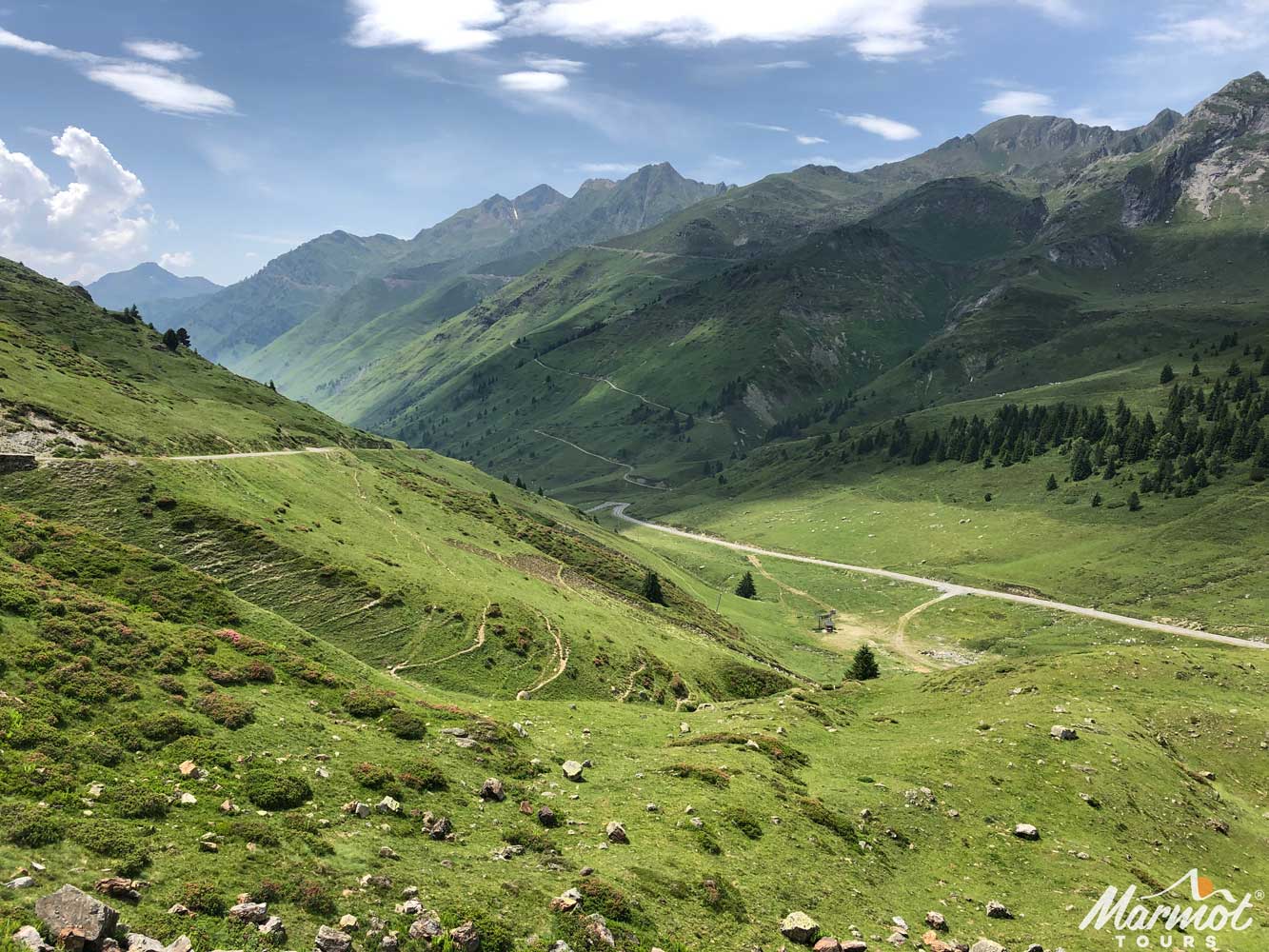 You could say that the Raid Pyrenees (a.k.a Raid Pyrenean or Coast to Coast Pyrenees) and Marmot Tours are old friends: we’ve been supporting cyclists on this epic cycling challenge for over 15 years. That’s one reason we think it’s worth celebrating the 70thAnniversary of the very first Raid Pyrenean this year.

2020 will see the Cyclo Club Béarnais (CCB) register the 10,000th participant of the Raid Pyrenean. In fact, they registered 600 participants in 2014, which was also the year we supported the most cyclists on the Raid Pyrenees and when the challenge was at its peak in popularity. That year, we ran 15 different departures, so potentially 50% of those 600 cyclists registered were supported by Marmot Tours. Some other interesting facts about the Raid Pyrenean we’ve gathered are:

In June 1950, the Cyclo Club Béarnais (CCB) organised (in the very loose sense of the word) the first crossing of the Pyrenees by bicycle within 100 hours. The CCB has kindly shared with us the diary entries of the first cyclists to forge the way for thousands who followed. Interestingly, this first crossing was from East-to-West, and it wasn’t until 1951 that the crossing of the Pyrenees that has become the standard route was introduced. The first successful attempt by Lily Betbeder and Paul Mathis is quite a testament to bravery and determination, especially considering the kit the riders will have had compared to today’s highly technical bikes, fabrics, GPS routes and so on. We’ve translated it from the French original and hope you enjoy it as much as we did!

In 1912 in Saint-Etienne at the meetings of the Stéphanoise School of Cycles the great precursor, M. de Vivie, had planned the attempt in one stage by bicycle of the large diagonals connecting France. At the same time, M. Bugard, currently honorary president of the Cyclo Club Béarnais, made this judgment: Cerbere-Hendaye will be the toughest, albeit the shortest. It is not ready to be attempted. To this end, the pioneer of cycle tourism in Béarn in 1939 prepared very seriously (sic. trained) Abadie-Leme, considered at the time as the most suitable man because of his great qualities to carry out this crossing of the Pyrenean chain.

“When Man proposes, God disposes”. Thus the war did not allow Abadie-Leme to attempt this crossing. In July 1949 Piege and myself, both of the Béarnais Cyclo Club of Pau made a first attempt which ended in failure on Hendaye- Perpignan, both being unable to overcome the Tourmalet, defeated by oppressive heat. I wanted to try again in September of the same year, but the tiredness of an already long season made me postpone my project until 1950.

The winter evenings often saw me deep in the “Michelin” cards Perpignan-Luchon and Luchon-Bayone, preparing route and timetable. I was looking forward to the arrival of the first sunny days to start my training. Despite a snowy winter on the Pyrenees, I was fortunate enough to be able to climb almost all passes in training and I had set my departure for Pentecost. I had to delay it by three weeks, the Tourmalet being still closed.

On June 14, departure from Pau for Cerbere by train. Miss Betbeder, my teammate from Hendaye-Menton decides to accompany me to try this raid. She also had a lot of riding experience already. This saves me from leaving alone. She decides for herself that if she is too tired, she will stop.

Cerbere – Friday June 16 2:45 p.m.We are at the customs post and easily obtain the stamp on our departure control card and at 3 p.m. sharp we leave.

From the start it is a succession of rapid ascents and descents that take us along the coast to Collioure. It is very hot and it smells like a storm. Argelès is reached at 4:20 pm: the road goes in a straight line until Elne, where we fork by the national 612 by Thuir, famous for the Byrrh cellars. We join the national 116 at Ille-sur-la-Têt which we will not leave until Bourg-Madame.

Passage at Ille-sur-la-Têt at 6.30 p.m.The road begins to climb and does so for 55 km to Mont-Louis (altitude 1500 m) which is reached at 24h20 after a stop of almost 2h at Prade for the meal, and blocked by a very violent thunderstorm. In Mont-Louis, the temperature is more than cool and we put on our anorak leggings and headbands for the crossing of the Col de la Perche and the descent by Saillagousse to Bourg-Madame which we reach at 1h40. From Bourg-Madame, a long climb of 27 km which will bring us in the early hours and in freezing cold to the Col du Puymorens (altitude 1915 m) at 4:45 am.

The descent which will last 54 km to Tarascon is magnificent, but we are numb and literally freezing with cold and are obliged to make several stops to warm up and another more serious for a verification of our identity cards by the Tarascon GRS (altitude 474 m). Tarascon is reached at 7:30 a.m. A hearty breakfast is necessary to attack the Col de Port, which will take us up to 1249 m above sea level.

The heat has returned and the slope is quite severe. It is with pleasure that we start the descent of 38 km which in a gradual slope will lead us to Saint-Girons (altitude 391m) where we arrive for lunch at 11:50 am. We still have to cross two passes, the Col du Portet-d’Aspet at 1069 m above sea level and after a descent to the altitude of 486 m up the Col des Ares (altitude 796 m).

From Saint-Girons to Luchon we ride in stormy rain and are happy to arrive in Luchon at 7:40 p.m. Half of the route is done but the most difficult remains to be done, so the six hours of rest we have planned are used to clean up, massage, restore and above all relax our muscles.

At 12:15 am, I am awakened by our hotelier, who insisted on serving us breakfast before leaving – very civilised for us. At one o’clock we leave Luchon for the attack on the Col de Peyresourde (altitude 1563 m). Here the route is familiar to us, it is the route of the RCP (Hiking of the Pyrenean Passes). The sky is starry and at 3 o’clock we are at the pass.

After a difficult descent at night on Arreau (altitude 704 m), where we pass at 4 am, there is the Col d’Aspin (altitude 1469 m) which is climbed at the same time as the day rises. It is cold at the pass and we plunge again into a descent which leads us through a magnificent fir forest in Sainte-Marie-de-Campan where we find coming ahead of us, Pucheu and Luceau, two comrades from the CCB.

At Sainte-Marie-de-Campan a hearty breakfast had been prepared for us, but gripped by the cold on the descent of the Aspin, I was overcome by severe stomach ache. The weather looks good and the four of us set off again at 7:30 am to attack the Tourmalet (altitude 2115 m), the culmination of our raid. Four km further on, nothing is going well; my legs cut, vomiting… I stop the first time, then two and three times. I decide to turn around, letting my teammate go who is in great shape accompanied by Pucheu and Luceau.

I come back to Sainte-Marie-de-Campan where I stay in bed until 1 p.m. Then digest a light but very salty soup which does me a lot of good. At 2 p.m, being very thirsty, I have a bottle of lemonade, then a second and at 3.30 p.m. I decide to leave. At 4 p.m. I attack the Tourmalet for the second time today. 2h35 later I am at the pass in excellent physical condition. A quick dive through Barèges to Luz and Argelès where I arrive at 7:30 p.m. I feel the urge to eat and wonder what to do? Because hanging out on Soulor and Aubisque in the middle of the night hardly enchants me! I take my meal, and by phone from Pau I hear the the position of Miss Betbeder who happily passed Soulor and Aubisque, and decided wisely to rest in Louvie-Juzon. I also learn that she must leave at 4am. I decide to join her and the only solution is to pass the Soulor pass (1446m) and the Aubisque pass (1704m) at night. I hit the road at 11 p.m. Arrens is reached at 24h15, Soulor at 1h45. It is an inky night and the crossing of the Litor is sinister. The two tunnels that cross the road are crowded with cows which find an excellent shelter there for the night. Finally, Aubisque is reached at 3 a.m. Now I must descend – I almost didn’t finish my route two or three times.

Eaux-Bonnes is reached at the same time as the first light of the day, the nerves a little shaken and the muscles hardened by cold and contraction. I took 40 minutes to descend the 12 km from the pass. I have 20 minutes left to be on time and I have 17 km to cover. I started a real race against the clock and at 4:05 am I was in Louvie-Juzon. My effort was rewarded because Miss Betbeder, warned during the night of my return, was waiting for me. At 5 o’clock again in the saddle I thank Luceau for his kindness and he leaves us wishing us a safe journey.

By the Bois du Baget, Saint-Christau, Asasp, we take a bad road which is however the national 618 and which leads us to the small pass of Issor. Then we spin through Arette and Lannes sur Tardets where we are at 8:30 am. We have to regain strength again and without losing time we gain Mauléon, then a further ascent to the Osquisch pass (500m) where the gradient and the sun put us to the test. Larcevaux is reached at 11:30 am and we decide to go to Saint-Jean-Pied-de-Port where we are at 12:45 pm.

We still have 80 km to cover before reaching the goal and at 2 p.m. we start this last section, still as rough and successively we pass to Louhossoa, Espelette, Aïnhoa and here is the last pass, Saint Ignace; very easy this one but with a tough final 3 km hill, we finally dive on Hendaye, and reach the border post at 7:30 p.m.

We are despite repeated efforts in good physical condition, especially Miss Betbeder who finished this raid in remarkable shape. As for my own indisposition, it wasn’t quite as good, caused by the cold on the descent from the Col d’Aspin and at Hendaye but I was fine.

We are obviously happy to have been the first to succeed in this crossing of the Pyrenean chain, a raid which must be unique by being carried out in our mountains. The Cyclo Club Béarnais intends to make it an official open event during three or four months of each year under the name of “Flèche Maurice Bugard”.

Wow. Chapeau! If this has inspired YOU to take on the challenge yourself, check out how we can support you on the Raid Pyrenean here: there’s no need to go through quite such a gruelling ordeal as Lily and Paul! Please do give us a call on 01373 830409 or drop us an email if you have any queries. You might also find helpful our blog: