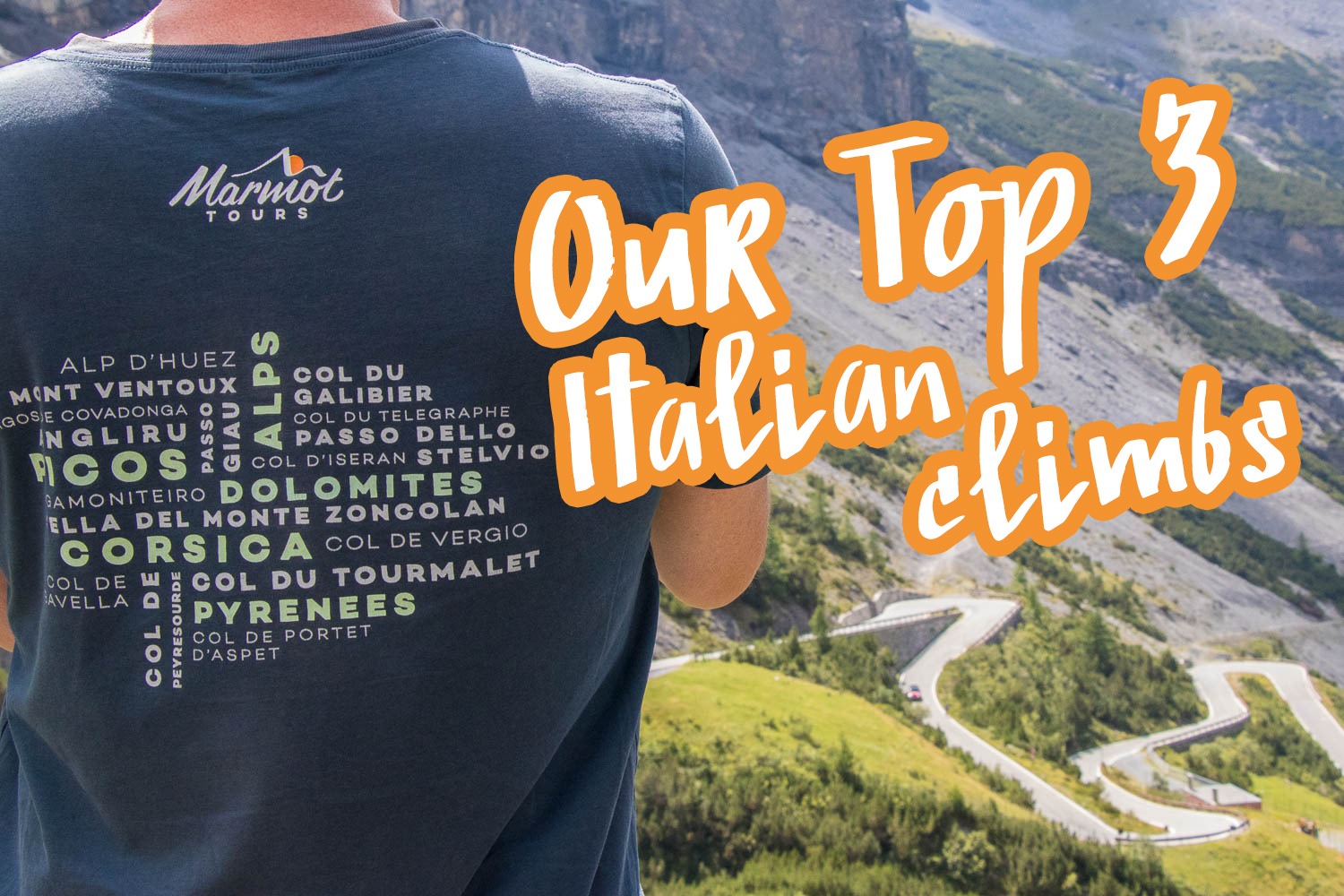 In this first instalment of our ‘climb focused’ blogs, we’re shining a light on our top three Italian climbs. The climbs in question may not be the highest, and they may not be the longest, but they all have a character and charm* of their own and deserve singing about (cue bellows of Pavarotti impressions…)

For our first course of this hearty Italian meal we present a piping hot serving of the Cime di Lavaredo – a climb that has been described as brooding, beautiful and brutal all in the same sentence, which is no mean feat!

Towering almost 10,000ft into the air, the Tre Cime, or ‘Three Peaks’ of Lavaredo mark the border between the Italian provinces of South Tyrol and Belluno and dominate an already busy landscape, for miles around.

Having once formed the border between Italy and Austria, the Tre Cime are to this day littered with historical artefacts reminding us of the fierce battles once fought here. Walkers who venture off on many of the signed hiking trails can retrace the footsteps of soldiers who once fought here, which boggles the mind, given the extreme nature of the terrain. Fight they did, however, and those who venture even further ‘off piste’ will find remnants of tunnels, trenches and steel holds bolted into the rock, which formed the frontline between Italy and Austria in World war 1.

For though, we’re going to focus on the road itself, and the task at hand – getting to the top!

Breaking Down the Climb

Starting just meters away from the shore of the beautiful Lago di Misurina, the route to Rifugio Auronzo (the hikers refuge and restaurant we’re aiming for at the end of the road) climbs gradually for the first kilometer, passing through open fields peppered with pine trees and picnic tables, along to the much smaller Lago di Antorno – your last bit of respite before the action starts. A very short descent from here puts you at the base of the climb proper. Hands up who loves a climb that begins with a descent?! ✋

From here the road pitches up almost immediately and holds its position in an unrelenting display of resistance almost all the way to the summit, a mere 4km away. Within those 4km the rider will accumulate an unthinkable amount of vertical ascent, over an average gradient of nearly 10%, with maximum pitches of up to 18% – gulp!

The Giro vs the Tre Cime

The Tre Cime was first debuted in 1967 by the famous Giro organiser Vincenzo Torriani, to mixed reviews. The steep 4km final stretch was deemed by many to be too severe for the riders, especially at the end of mountain stages, and when the riders found themselves being pushed by the Tifosi almost all the way to Rifugio Auronzo the race was thrown into turmoil and the result annulled. Nevertheless, the climb has continued to be used and most recently made an appearance in 2013 when Vincenzo Nibali rode out of the snow in pink to take the 96th Giro d’Italia.

Mere mortals vs the Tre Cime

From a cyclist’s perspective, this climb is somewhat unique as you can climb and descend in relative peace, owing to the toll system at the foot of the mountain restricting vehicular access. When the car park at the top is full, a one-in-one-out system comes into effect meaning that for sometimes up to 30 or 40 minutes at a time the road is completely empty, save for a smattering of panting and wheezing cyclists clawing their way to the top, and not forgetting the Marmot Tours support vehicles tooting their way up and down handing out the occasional sticky bidon!

And once at the top, the views are just mesmerising – well worth a celebratory group photo to mark the occasion!

The Tre Cime di Lavaredo features on our 9-day Raid Dolomites trip, as well as on our shorter and more flexible Classic Cols of the Dolomites holiday. You can learn about the differences between the two styles of holiday by clicking here.

Since 1988 the Passo Giau has featured in the annual Maratona Dolomites sportive, being the sixth and steepest of the seven Dolomites mountain passes riders cross that day.

Cycle the Giau with Guided Support from Marmot Tours

Choose to ride it on a Marmot Tours holiday, however, and you have options, many options! Our testing Raid Dolomites adventure (which starts just outside Geneva and finishes in Trieste 9 days later – phew!) tackles the climb from Selva di Cadore and it’s the final climb of the day, before an exciting descent down to our hotel on the outskirts of Cortina. Starting from Selva di Cadore, the Passo Giau ascent is 10.12 km long. Over this distance, you climb 922 altitude metres with the average percentage being 9.1 %.

Short Cycling Breaks to the Dolomites

There is a third and final trip that samples the Giau, and that is our popular 4 day Best of the Dolomites ‘Mini Break’, which we base out of a fab, 4* lakeside hotel in Alleghe. This gives us access to some of the best cycling the region has to offer, whilst being perfectly suited to those who might want to bring a non-cycling partner along, or for those who simply enjoy not having to move on each day, and the added flexibility that it affords.

Whilst taking in the best the region has to offer, this trip caters for those wanting to ride the Sella Rondana and Marmolada Loops. Options galore!

Despite first being used way back in 1973, it wasn’t until the late 2000s that the climb started to be used regularly in the race. Nowadays the climb seems a permanent fixture, with its scenery and difficulty both surpassing that of the parallel Falzarego Pass (which we also cross in numerous directions on our trips).

Before being paved, the ‘road’ was merely a mule track used by local farmers for forestry services. It may be a ‘new’ climb, but what it lacks in history it more than makes up for with character, and at the time of writing has been featured in the Giro 7 times.

The Splügen Pass is a climb that connects the Swiss town of Splügen (just down the road from Hinterhein) with the Italian town of Chiavenna, which continues on to the majestic Lake Como.

For these purposes, this is Georgraphy & Topology, but there’ll be time to reward yourself with a refresher later …. Starting from Splügen, the Passo Splügen ascent is 8.8km long, and gains a total of 655m height metres, with an average gradient of 7.4%. Whilst it may not be the most challenging in terms of difficulty, what the climb lacks in this area it more than makes up for with its characteristic switchbacks, each revealing another glimpse of the road below as you climb higher and higher. It also has the added feature of being a border post between Switzerland and Italy, with the name Splügen likely being derived from the word ‘specula’ or ‘to look’, owing to its lookout position.

Since the opening of the San Bernardino road tunnel/bypass in 1967, the Splügen Pass and the San Bernadino Pass have lost their former importance. This has ultimately resulted in much quieter roads for cyclists to enjoy, away from the heavy, haulage traffic looking to cross from one valley into the next.

The pass seems destined to remain a relatively quiet sanctuary for visiting cyclists as plans to build a railway over the pass were shelved in favour of the Gotthard railway which opened in 1882.

Rather surprisingly this is a pass that has little formal history with bike racing. The climb up from Chiavenna on the Italian side boasts hugely varied terrain, climbing and dropping, twisting and turning, over a total distance of 30.2km, gaining a total of 1780 vertical metres at an average gradient of 5.9%. Fortunately for we climb the Swiss side and get to enjoy the 30km descent all the way down to lunch, and our first visit to a true Italian pizzeria – bellissimo!

So there we have it, three of our favourite Italian cycling climbs that all feature on Marmot Tours trips. Which are your favourite? Head on over to our Instagram or Facebook pages to let us know!

Based at a wonderful 4* lakeside hotel, our ‘Best of the Dolomites 4 day mini-break’ is perfect for couples who want a shorter trip with the flexibility of not having to ride each day (or at all!), and has departures in both June and July.

Our ‘Classic Cols of the Dolomites & Stelvio‘ trip runs for 6 days with departures between June and September and is perfect for those wanting more of of the region as a whole, moving between 3/4* hotels each day.

Our Raid Dolomites (Geneva to Trieste) trip runs for 9 days and passes through France, Italy and Switzerland, offering riders an exhaustive (and sometimes exhausting!) insight into the Dolomites range. This testing trip has departures across July and August and you stay in a varied range of accommodation, sampling a different culture and cuisine each day.

For further clarification on what makes a ‘RAID’ different to a ‘Classic Cols’ trip, why not read our blog by clicking here.

For any queries on the holidays featured here (or indeed, on any of our other holidays), please do drop us a line to cycle@marmot-tours.co.uk or give us a call on 01373 830409.

Look out for the second part of this blog featuring lesser known and potential future classic climbs of Europe …. coming soon!